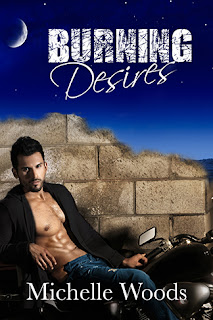 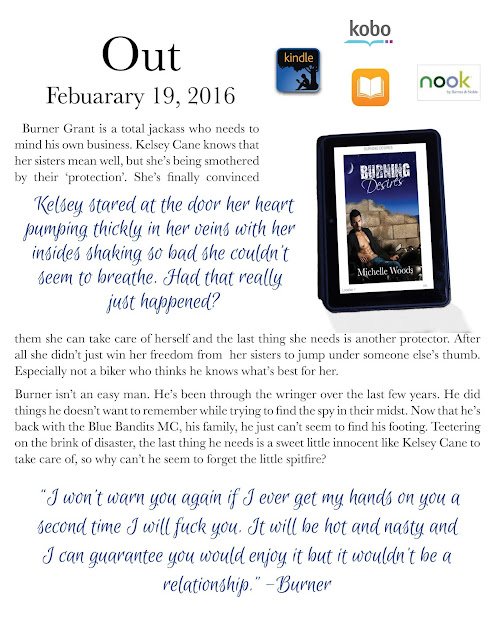 A excerpt from Burning Desires:
Kelsey lay beside him, her heart still racing and the bliss flowing through her every nerve ending. Her toes were even tingling and her breath was still heavy and labored but she wasn’t sure that Burner had felt what she had because the minute it was over, he’d rolled off her and hadn’t touched her since. She wanted to think that it hadn’t just been sex to him but she wasn’t going to hold her breath after the warnings he’d given her.
She knew that she wasn’t going to be the clingy desperate woman he likely expected. She could do just sex. Only what had happened a few minutes ago had shaken her world. The way he held her hands as he moved inside her, their bodies in sync in a way she’d never known before, had felt like fate and that was something she needed to come to terms with. Her hand rose to rub across her swollen lips trying to hold onto the kisses he’d given her only moments before.
“Thanks for that sweetness,” Burner said rising from the bed, looking down at her for a moment before moving to the bathroom and shutting the door, leaving her lying there staring at it.
She kept telling herself as she stared at the barrier between them that she could do sex with no strings but even she knew when he left she’d end up in a ball of misery. Kelsey sat up, the covers falling to her lap. Flicking on the light, she searched for the clothing he’d taken off her while she was sleeping, finding they were across the room where he must have tossed them.
Getting up, she grabbed the loose sleep pants and t-shirt, putting them on over her still sensitive skin. Looking at the clock to find it was only ten, Kelsey heard the shower come on and let out a little sigh as she mournfully stared at the bed knowing that going back to sleep was useless. She was too awake to go back to bed now so she hit the button to raise the shutters and headed into the kitchen for coffee.
Leaning on the counter five minutes later with a cup of coffee in her hand, she watched Burner walk out of her bedroom. He wore jeans that hugged his hips and rode low on his waist with only a leather vest covering his chest because his shirt was held in his hand.
Damn, the man was seriously hot.
Kelsey was struck by the sudden urge to lick his hard abs from top to bottom repeatedly. Him being half naked wasn’t helping her keep her libido under control until she realized why he was most likely holding instead of wearing that shirt. She would bet it was because it still reeked of honeysuckle perfume and alcohol. Her grip on the cup tightened, her body stiff as she gazed at him without speaking.
“Well,” Burner muttered, his eyes moving from her to the door and she would bet he was thinking this was going to be ugly but she refused to embarrass herself by making a scene. “I have to leave. The club has church in a few hours,” he finally finished and she almost snorted at the lame excuse.
Yeah, like she believed they were religious.
at February 01, 2016 No comments: