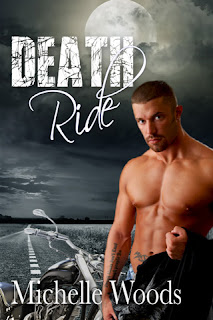 Death Rider was never the warm and fuzzy type. Life taught him that nothing ever stayed the same for long and people who didn’t keep their eyes open ended up dead. He always had a backup plan even for his backup plan. It had served him well over the years but he hadn’t been counting on Jamie, her knockout lip gloss—and he meant knockout literally—or waking up chained to a bed. Now trapped until Blade decided to kill him or let him go he couldn’t understand why he felt protective instead of livid whenever she was near. Death was beginning to question if maybe he hadn’t hit his head a little too hard when he fell face first into that parking lot.

Jamie Harrison had allowed her brother to talk her into entrapment. Seeing Death in chains has her putting her lip-gloss away for good. She didn’t know how to deal with the man she’d already captured. Why would she ever need to capture another one? Now Blade’s forcing her to care for Death despite her protests. Jamie’s never met a man like Death. He was sweet at times and colder than ice at others. Confused and more than a little frustrated Jamie didn’t know how she was going to convince Death that all her brother’s plan needed was a chance.
at June 11, 2016