Working on the second book: The Devil's Mistake 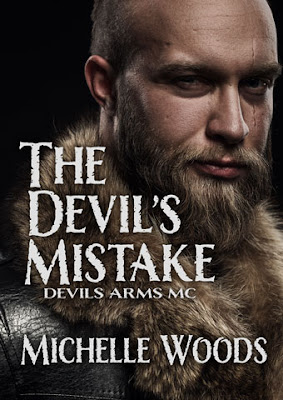 
Brody “Rage” Jameson has only ever loved one woman. He never thought he would ever leave her side once he finally made it home. After spending three glorious nights in her arms, his world shattered and he had to leave her. He was always planning on coming back for her once he had everything sorted, only he returned to find her living with another man and pregnant. With his soul ripped out and his world spiraling, he sank all his anger into the Devils Arms MC. For years he was content to be a part of the MC. Now she’s walked back into his town and his life. From the moment he first lays eyes on her he knows damned well he won’t walk away a second time. Zoey was about to find out she’s always belonged to him, and a devil never makes a mistake twice.

Zoey Fredricks thought she’d found the love of her life at sixteen. Two years later he went off to the Army. She waited on him to come back for six years. Three nights of bliss was all she got before he disappeared on her again, leaving her pregnant and alone. Her heart in shambles from the accusations he threw at her when he finally decided to show his face left her lost and confused. Now five years later she was coming back to her hometown to start again. It was a hard choice, but she’d do anything for her son, even if it meant she had to face his father.

New Book: In the Devils Arms