New Release! Saved by the Devil 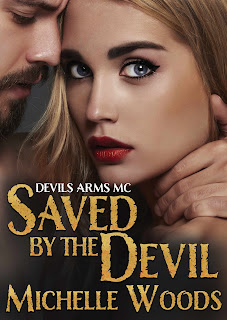 Out Today at Amazon!
Should be out tomorrow at Kobo and Nook!


Pregnant and on the run from her abusive husband, Phoebe Smith is in serious trouble. Escaping Johnny wasn’t easy, and running into the arms of a biker named Peanut was never part of her plan. Between his adorable daughter and his gentle caresses, she can’t seem to walk away. Now she’s asking herself if maybe staying isn’t so bad, but when Johnny shows up everything changes.

Peanut Davies never thought he’d find love. He was happy raising his daughter and helping his brothers. He thought that would be enough, until she walked into the diner and something inside him shifted. Now he’s talking softly and pretending to be a gentleman, but he always knew it couldn’t last forever. Once her husband shows up, trying to force her back into her role as a victim, Peanut has to make a choice—save her or keep her. Really there isn’t a choice at all and he knows that even if it means losing her, he will protect her.
at September 29, 2019